To celebrate St George’s Day, we have compiled a list of five key facts about England’s Patron Saint…

HE WASN’T ACTUALLY ENGLISH
St George was actually born in Cappadocia in the year 280.


In case you were wondering, Cappadocia is the area now known as Turkey.


Even though St George wasn’t from England and probably never set foot in the country, he is still the country’s Patron Saint – representing courage and bravery.

HE SLAYED A DRAGON (ALLEGEDLY)
The famous legend originates from the Libyan town of Silene. 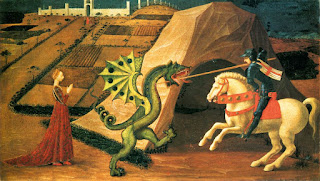 Silene was apparently guarded by a dragon and in order for the town’s residents to get water, they had to offer a sacrifice to the ferocious beast every day.

One day, the residents agreed to offer their princess up for sacrifice.


However, on the day she was due to be killed, St George came riding by on his white horse, before killing the dragon with his sword, saving the princess in the process.

HE DIED ON THE SAME DAY AS SHAKESPEARE
St George was a soldier of the Roman Army, however after protesting against the pagan Emperor for his persecution of Christians, he was beheaded on April 23rd in the year 303.


Albeit it over a thousand years later, iconic poet and playwright, William Shakespeare died on the same day in 1616, aged 52.

HE HAS A NATIONAL DAY NAMED AFTER HIM
Since 1415, St George’s Day has been celebrated yearly, on the 23rd April - unless Easter Sunday falls on the same day.

St Georges Day is England’s National Day, however it is not a public holiday and hasn’t been since 1707.

However, that doesn’t stop the more patriotic citizen from flag waving, Morris Dancing and tucking into some traditional foods, such as fish and chips.

AS WELL AS ENGLAND, HE IS ALSO PATRON SAINT OF…
Portugal, Venice, Beirut, Malta, Ethiopia, Georgia, Serbia, Lithuania and the Palestinian territories.


However, his Patron Saint duties aren’t exclusive to countries.


St George is also Patron Saint of Scouting. So every year, on the Sunday nearest to the St Georges Day, scouts and guides throughout England parade through the streets in honour of him.